by Alex
10 months ago 0 1257
Benefits
Disadvantages

We tell you everything you need to know about DaddySkins in our review. We discuss the positives and negatives of the site, the promo code to earn bonuses and how to withdraw skins from the site. Our Daddyskins review will help you to better understand the site and play safely.

DaddySkins is a CSGO skins crate opening site. It was launched in January 2017 and since then, over 54 million crates have been opened on the site. Opening crates is not the only thing to do on DaddySkins. Arenas, Tradeup, contracts, exchange and jackpot are additional games for the users of the site.

DaddySkins uses G2APay for all deposit transactions, which allows users to access many different payment options such as credit cards, Ethereum, and many others. Users can register and login to DaddySkins by clicking on the "Login" button located in the upper right corner of the site. It is also possible to log in using Steam, Facebook or Google.

If you have never used Daddyskins before, there is a bonus waiting for you to enjoy the site.

It is enough to register via our link and enter the code CSGODUDE to receive an additional 5% on all your deposits !

It's free and it doesn't cost you anything extra, on the contrary, you earn more money.

You can deposit money via several methods.

At first, you can deposit csgo skins which will allow you to have an equivalent price in coins on the site. If you prefer more traditional payments, you can use g2a pay which allows you to pay with credit cards, skrill or bitcoin.

Recently the site has added payment in ethereum or via gift card. 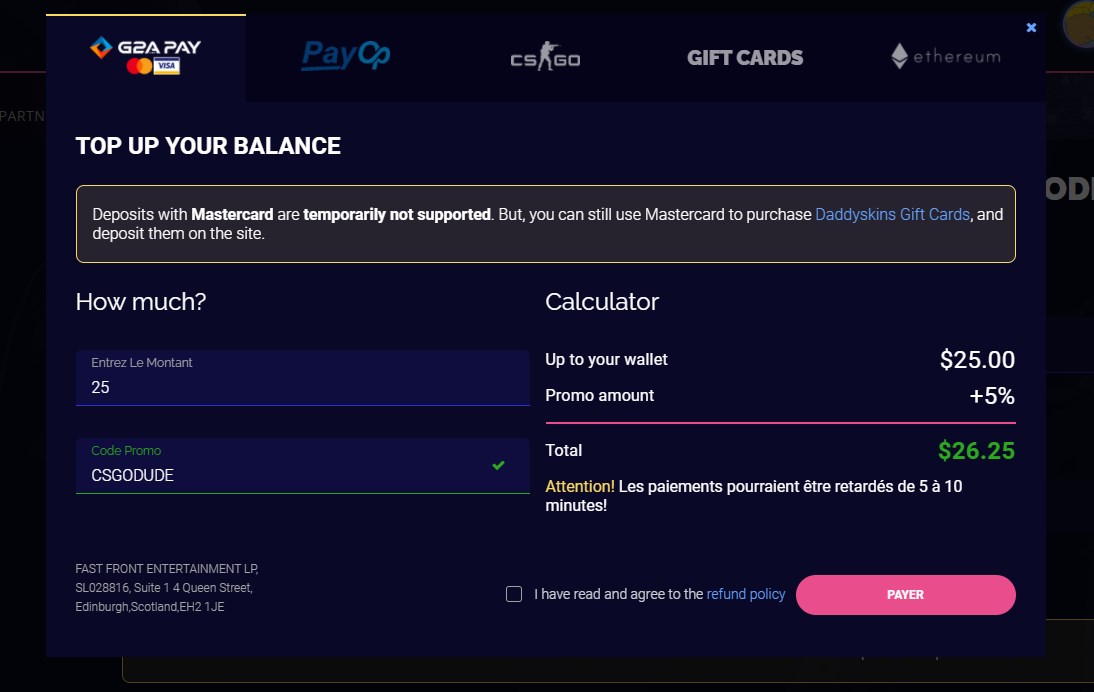 How to get DaddySkins skins

DaddySkins offers you many options to get CSGO skins and other virtual items. Below are the different ways to get new skins on the site.

This is the opening of cases that many users are already familiar with. The price of the cases ranges from a few cents to several hundred dollars.

The arenas are similar to opening crates but against other players. The game can be played with 2, 3 or 4 players who each open crates. A room is created where a line of crates is opened simultaneously by the players. The player with the highest total value wins the skins of the other players. You can create your own arena or join one that another user has created.

The upgrade gives users the opportunity to turn low-value skins into higher-quality skins. You choose which particular skin you want to receive if you win. The greater the difference in value between the two skins, the lower the chance of success. You can also add from your account balance to increase your chances of getting the skin you want and reduce the risk factor.

Swap contracts allow users to exchange two or more low-value skins for a higher-quality one. The skin you receive is randomly selected by the DaddySkins system within a defined price range.

The jackpot is a kind of bonus that gives users the opportunity to win money for every crate they open, including those in arenas. A small percentage of the value of each opened crate goes into a Jackpot. Each opened case rolls a number. If the number rolled falls on 77777, the user who opened the crate wins the jackpot. The size of the jackpot varies depending on the value of the opened cash register.

Technically, this is not a way to get new skins, but you can use the jackpot winnings to open more crates.

How to remove skins from DaddySkins

Removing skins from DaddySkins depends on the type of skin you want to remove. VGO skins can be removed using OPSkins to complete the transaction.

Obtaining CSGO skins is a bit trickier. You get the price of the skins in Ethereum on bitskins and use the balance to buy the CSGO skin you want. This is a common practice on many cashiering sites, which allows you to bypass the trade ban.

Is DaddySkins reliable or a scam?

DaddySkins has been in operation for over three years and has had over 1.1 million users in that time. It was one of the first sites to introduce a proven fairness system that allows users to verify the fairness of game results.

🍀 How do I get my Daddyskins bonus back?

When you enter the code CSGODUDE before each purchase, you get an extra 5% on your scale, enough to open more cases.

🖱️ What games are available on Daddyskins?

Daddyskins is a site of case opening, you can open cases between 0.30 and 150 euros. You also have an arena to fight between members of the site to get the skins of the opponent.

💡 How do you deposit and withdraw on Daddyskins?

Deposits are made by cryptocurrency, csgo skin or credit card. For withdrawals, it is simply the skins obtained on the site.

DaddySkins has been around for a while and has had over a million users since it has been in operation. The site offers a good selection of cash registers with a wide variety of prizes and all games are run on a system that is proven to be fair.

They also offer generous bonuses to users of their site. Overall, DaddySkins is a good CSGO checkout site but perhaps not the best.